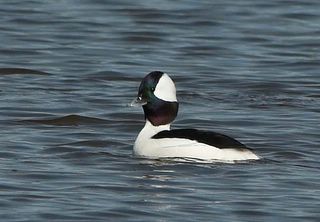 I went looking for water birds to photograph today at Oak Bay and Kai Tai lagoon. I saw about 200 Puget Sound Gulls at Oak Bay, 20 crows, 20 Buffleheads, 40 Northern Pintails, 6 American Wigeons, a pair of Hooded Mergansers and about 150 Brants. The Buffleheads were mostly on the bay rather than in the pond. The Brants were just south of the park boundary. A Bald Eagle went by overhead too.

At Kai Tai, I saw at least 20 Buffleheads, a half dozen Mallards, a pair of Gadwells, two American Coots, several American Wigeons, a Lesser Scaup, several gulls, and two female Ruddy Ducks. The Buffleheads were having a fine time displaying and courting their females.

This is my first attempt to include a photo album of the day's birding. I'm using JAlbum 5.2 with the BluPlusPlus skin. I've already seen several ways I'll have to change my workflow to improve the image quality. For the photoblog, I'm using Picasso to upload the image and create a blog entry with blogger.com. I'm still stumbling around a bit with all these new software components.

To get the photos ready to publish, I used RawShooter Essentials to select and develop the photos. I then used PaintShop Pro 9 to convert the .TIFF files to .PSPIMAGE files. I then went through all the files, cropping and tweaking them slightly, to create .JPG files. I then included the .JPG files in JAlbum and uploaded the album. Click here to see the photo album.
Posted by Guy at 4:10 PM

Great job. This will help me learn to identify the birds.