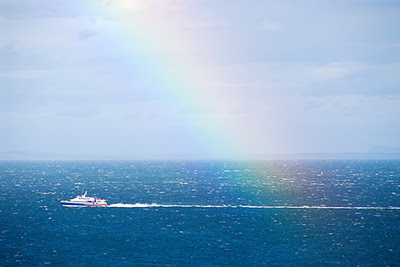 Here in Port Townsend, rainbows are sudden and fleeting. Keeping the camera ready pays off in moments like this. The Victoria Clipper IV flies the rainbow on its way from Seattle to Victoria, British Columbia. We see the Clipper daily, but usually further offshore and without a rainbow.

Recently, I've been leaving the new Nikon 18-200 mm f3.5-5.6 AF-S VR zoom lens mounted on the camera. That lens lets me grab just about any shot I want without having to change lenses. The trade-off is that the lens is not as sharp as some of Nikon's best lenses. Sometimes that trade-off is worth it. In my testing, images taken with the camera mounted on a tripod are quite satisfactorily sharp. As might be expected, hand-held images are better with VR than without, but not as sharp as when using a tripod.